This weekend was the sixth annual Crime and Publishment crime writing weekend, held as ever at the Mill Forge Hotel just north of Gretna Green.

As you might expect, the hotel is normally a wedding venue, but for one weekend a year they put aside the champagne and glitter and break out the pen and paper – and gore! – instead. The course lasts for two and a half days, with a wide range of speakers and subjects, this year covering everything from research to making your characters believable to how to succeed on social media. Not only do you learn heaps, but it’s also lots of fun.

This year was my fifth in succession (I didn’t find out about it until the second year) and I loved it just as much as ever. It’s always nice to meet up with so many old friends (some have been going even longer than I have) and this time there were lots of new faces as well, all of them friendly and all just as passionate about writing as the rest of us. And then on the Sunday we all get the opportunity to pitch to a well-respected figure in the industry, be it publisher or agent. This year was the turn of Karen Sullivan of Orenda Books, who spoke entertainingly but passionately about the business of publishing, and of supporting authors throughout their careers.

For me the highlight was probably Michael J Malone’s session on building character, which made me realise that the main character in my current work-in-progress needed some serious attention. Not quite to the point of re-writing the whole ruddy book, but better to realise at this stage than after it’s been submitted somewhere. I spent half an hour on Saturday morning scribbling ideas and nearly missed the start of the first session!

A new feature this year was an unofficial book-swap, where we took along crime novels we’d finished with, to swap around for free. I took a couple that had been cluttering up my shelves – and came home with four more, which wasn’t quite the point…

Next year’s programme looks equally interesting, so I’ll almost certainly be heading back to Gretna for another dose.

The weather wasn’t especially kind, but here’s a couple of photos of the hotel and grounds, showing the pretty landscaping and wonderful attention to detail for couples getting married (and perhaps for hiding the odd dead body or two…!) 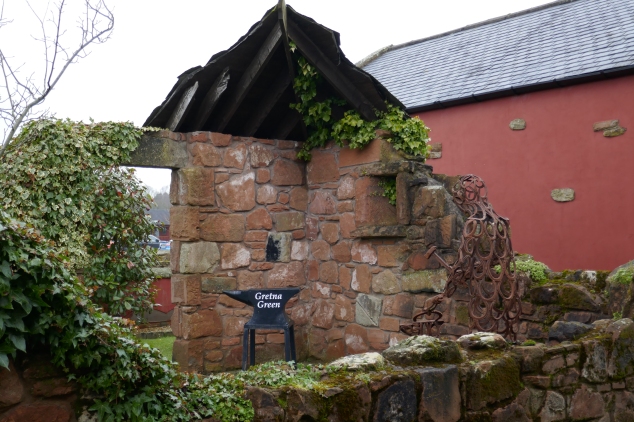