Just what do you do on a baking hot afternoon in Birmingham, in the middle of a heatwave, when even the modern shopping centres feel like the seventh circle of hell?

We had some time to kill in the city last week, in the sort of heat you normally associate with a middle-eastern country, not the UK. It was sunny, it was unforgiving, it was almost 30 degrees. Ordinarily I’d want to find the nearest patch of shade or countryside, preferably by some open water, to crash out. But in a city centre that’s not really an option, so we did the next best thing – head indoors to renew our acquaintance with Dippy.

For those of you who don’t know, Dippy is a dinosaur. Or was, 70-odd million years ago, before shuffling off this mortal coil and leaving his or her bones behind, to be dug up and turned into something of a national treasure. For the last century or so they’ve been gracing the main entrance hall at the Natural History Museum, where they’ve inspired generations of small children (and dare I say it, adults). Until last year, when the unthinkable happened. A blue whale moved in, and Dippy was booted out.

Since then he’s been on tour, stopping off at museums and exhibition halls around the UK so the public can pay their farewells, rather in the way of an ageing rock star doing one last world tour. And at the moment, it’s the turn of Birmingham. 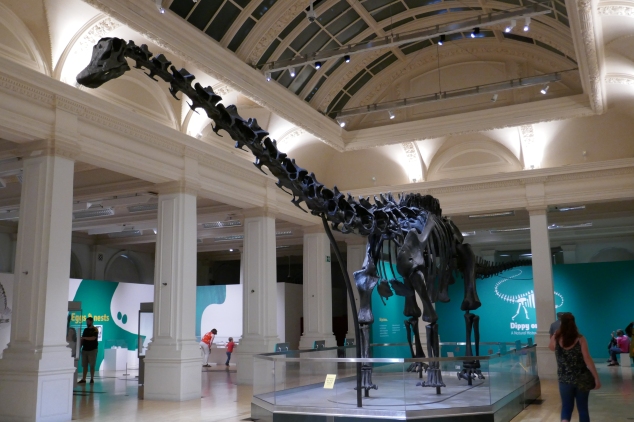 Of course, finding somewhere big enough to display an entire diplodocus skeleton isn’t easy. Brum has turned to one of its Edwardian ‘show’ spaces, an enormous hall  built in 1912 to house the Birmingham Gas Corporation. Nowadays it’s part of the larger Birmingham Museum & Art Gallery complex and is used for big exhibitions, and there aren’t many that come much bigger than Dippy. Even so, compared to the space at the Natural History Museum it’s pretty compact, and the poor thing looked rather squashed – to the point where they’d actually had to kink the last few feet of his tail upwards to fit him in.

This is rather a shame, as the impact of the sheer size of a fully-grown diplodocus has been reduced. Also, in the Nat Hist he served as a sort of ‘gatekeeper’, an introduction to the wealth of other exhibits and treasures waiting beyond. Not just dinosaurs but every other kind of living thing ever to inhabit the earth. Here, there’s a few cases of stuffed fluffies, a few explanatory boards, one small companion dinosaur, and a rather tacky gift-shop. And that’s all.

The whole thing is free (although you do have to book tickets in advance because of the crowds) but that isn’t really the point. Dippy was an inspiration. Everyone loves dinosaurs, even people who aren’t really interested in nature, and he was a fantastic way of getting kids into the museum in the first place. However grand the blue whale might be, I can’t see it having the same iconic, cult effect. So although it seems a bit daft to get so soppy about a bunch of old dinosaur bones, I’d really like to see the whale sent on tour instead (or put back in a box) and Dippy restored to his natural home.

And before anyone says it, I’m well aware that these aren’t even real bones. The actual skeleton is locked away somewhere and this is just a plaster cast. But no less impressive for that…