I was amused to see this headline on the local Midlands BBC news feed yesterday, about a giant “water fight” that seems to have got out of hand.

Not only does this feature Birmingham, but it happened in Cannon Hill park, by the Midland Arts Centre, not a hundred yards from the location I was writing about in my blog post a few days ago. Perhaps Todd and Cynthia went back to settle old scores?!

I’m intrigued to know what a water fight is, anyway. The article is remarkably unhelpful, but I’m picturing those big plastic squirty water pistols, or perhaps even paper/plastic “water bombs” filled in the boating lake. Am I being hopelessly naïve? Anyone got any better ideas?

It doesn’t sound like much of a location for a crime book, does it? A simple wooden bench at the local park. It’s the sort of place you lounge around on a hot day with a book and an ice-lolly, or perch for a few minutes to watch the ducks. Or use as a meeting place when you’re a grass waiting for your police handler, perhaps?

Obviously, it’s the latter in ‘Gravy Train’. When Todd decides to spill the beans he needs somewhere to meet the police inspector he liaises with, in order to pass on his reports. I could have chosen somewhere dark and secretive, but that seemed a little too formulaic – and a little too risky for Todd. Get caught with a female copper in a place no one would ever go and it’s hard to explain it away. Get caught chatting by the boating lake and you can at least say you’re catching up with an old flame. Which in his case isn’t so far from the truth.

He risked a sideways glance. Not in uniform now, just jeans and a belted mac. Was she off-duty, or did she always dress like that? She was plumper than before, but it had been eleven years. Eleven years during which she’d joined the police and risen through the ranks like yeast through dough. Not like him. He was still at the unproven stage; unleavened, lumpy, raw. He cleared his throat. “Yeah. It’s him, isn’t it? Lord High fucking Ball himself.”

“Oh? Last I heard you were happy working for him.”

He thought about that one. Stared out across the lake, full of ducks and model boats. Thought he saw Bradley’s pallid face, rising from the waters like some Arthurian legend he’d read about at school. He blinked. Nope, not going mad. It was just someone’s over-enthusiastic Labrador. “Not like it used to be,” he said at last. “All gone tits up. I’m not comfortable with some of – well, with what he’s asking me to do.”

He swallowed. She wasn’t supposed to ask him that. He couldn’t answer, anyway, not without incriminating himself. “Just… general crap. I want out. Thought maybe…” He stared at the lake again, the trees, the grass, the plants and picnickers and people having fun. He remembered fun, too, once. Fun with her, back in the day. But that had been years ago.

The setting I chose is Cannon Hill park in south-east Birmingham. It was donated to the city as meadow-land by local benefactor Miss Louisa Ann Ryland in 1873 and opened soon afterwards, and it’s perfect in so many ways. For starters, it’s just a short walk from where Todd is based, living in Vernon Ball’s basement in nearby Chantry Road. He can scuttle down there, have his meeting with Inspector Charlton, and still get back in time to wash the car. And secondly, it’s huge. A vast green open space covering over 200 acres, in fact, with 80 acres of formal parkland and 120 acres of woodland and “conservation areas”. It’s the most popular public park in Birmingham, and gets plenty of visitors, so there’s less chance of Todd having to hang around the woods by himself. There are several different entrances for him to sneak in and out of, and plenty of secluded corners and unusual features to hide in or behind.

These include statues, a massive memorial to the fallen of the Boer War, the footings of an old hot-house or conservatory, a working scale model (above) of the Elan Valley reservoirs in Wales that supply Birmingham with its drinking water, and most remarkable of all, an entire medieval pub, the Golden Lion, that was transported and re-erected in the park from nearby Deritend. Along the park’s northern edge it’s bounded by one of Birmingham’s small rivers, the Rea, and also by the modern buildings of the Midlands Arts Centre or MAC (below), which is where Cynthia and her friends appeared from to give Todd a near-heart attack. 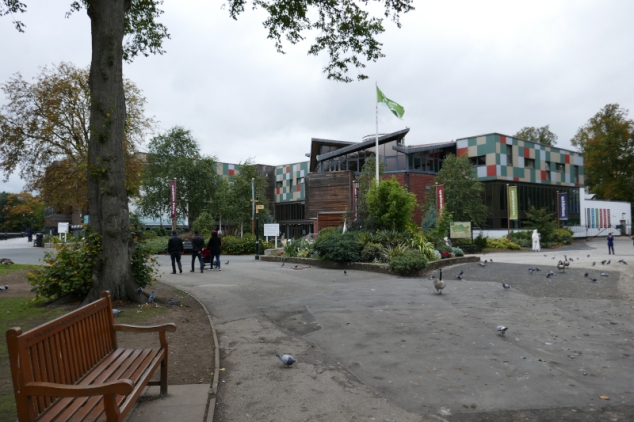 “Goodness me, you do turn up in some very unusual places,” said a voice dripping with vinegar.

It was Cynthia, emerging from the MAC café behind them with a screeching gaggle of her friends. Noisier than the fucking geese. No wonder the ducks had fled.

Thank Christ – thank fucking Christ – Charlton was still not in uniform. Even so, she’d been on the local news a time or two, reporting progress on this case or that. It wasn’t impossible that Cynthia would recognise her. What to say? What to do? Think, man, think.

Charlton herself turned into an unlikely guardian angel. “Oh, hello, another girlfriend, Todd? Which one’s this?”

“No, no. No. Nothing like that.” He was stammering, he must look like a fucking idiot, but thanks to her, it looked like domestic embarrassment. Nothing worse. “This is Cynthia Ball. My employer’s wife, you know. Cynthia, Suzanne. Suzanne, Cynthia.”

“Delighted, I’m sure.” Cynthia took Charlton’s outstretched hand in a brief, limp grip, then lost interest in anything so dull. “Just the chauffeur, darling,” he heard her say to her friends. “Out with some woman. How sweet.”

He puffed out his cheeks, wondered if this was how it felt to have an actual heart attack. “Fuck me, that was close.”

Todd hangs onto his cover – just – but the ducks do get their revenge. That particular episode is based on personal experience, which should give everyone a laugh. As for Cannon Hill, it’s still one of my all-time favourite parks, even if I now associate it with big tough guys getting pecked on the arse!

The book is currently on offer as part of the #indiecrimecrawl week, and will also be included in other deals across the summer.

Check my website to keep up with all the latest news, or head to the Down & Out Books bookstore and quote “indiecc20” (until 21st July) to catch that crime crawl deal.